Invented in 1969, Gore-Tex is a fabric that is both waterproof and breathable at the same time, thanks to a special membrane that will repel liquid water while allowing water vapour to pass through.

Gore-Tex is a registered trademark of W. L. Gore & Associates. The generic term for the material is expanded PFTE (ePFTE), i.e. stretched polytetrafluoroethylene.

The standard production method for PTFE involves an emulsion polymerization process that requires fluorosurfactant PFOA:s. In 2013, W.L Gore and Associates eliminated the use of PFOA:s in manufacturing their weatherproof functional fabrics. 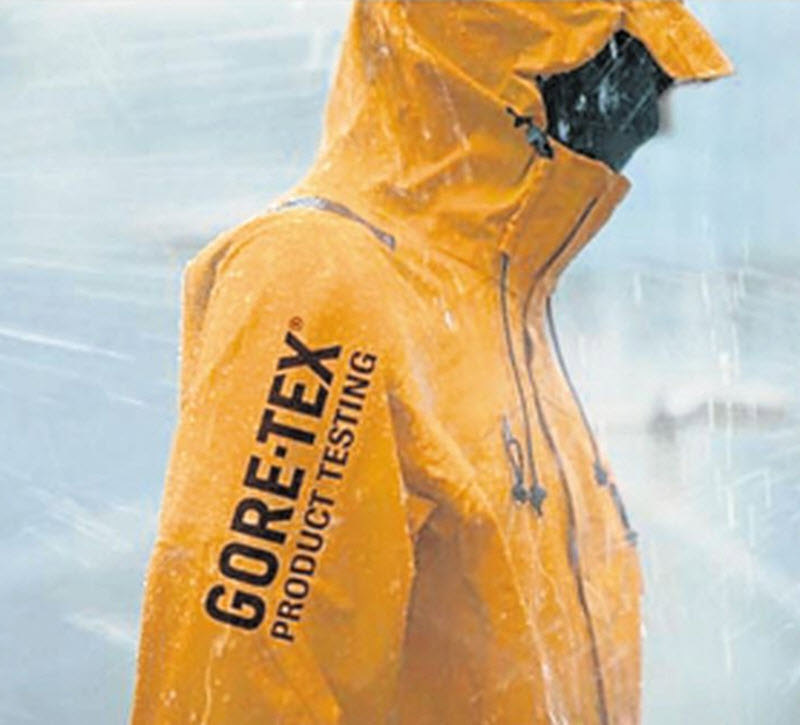 To the average consumer, Gore-Tex fabric is probably chiefly known for its use in rainwear, as it can be used to create garnments that protects the wearer from getting wet in the rain without making the skin feel clamy.

Before Gore-Tex, simple rainwear would consist of two layers: a waterproof layer (e.g. polyurethane) and a layer that would provide strenght (e.g. woven nylon or polyester).

The first Gore-Tex rainwear garnments had the waterproof layer replaced with stretched PTFE, which was coated on the other layer of fabric.

The PTFE could keep rain drops out without blocking vapour, because of the size of the pores. It had around 1.4 billion pores per square centimetre, with each pore being roughly 1/20,000 the size of a water droplet. Liquid water could not pass through, but the more volatile water vapour molecules could.

If wearing and washing removes effectiveness of the DWR from the garnment, less vapour will pass through during rainy conditions, and this can make it seem as though the material is letting in rainwater. In reality, the soaked outer layer is trapping vapour. It is possible to reinvigorate the DWR by tumble drying the garmnet or ironing it on low heat.

E-PTFE is nearly inert inside the body, and can be used where a mesh is required. The porosity also allows for tissue to grow through the material.

In 1969, Bob Gore was researching a process for stretching extruded PTFE into pipe thred tape. At this point, he – and others – were attempting to slowly stretch heated PTFE by 10% or so. One day, out of frustration, Gore decided to instead apply a quick, accelerating yank. The PTFE stretched about 800%, and this was how Gore disovered that PTFE can be stretched into a porous form characterized by extremely high strenght and porosity. The structure that resulted from “the yank” was around 70% air.

By 1971, Gore was developing laminates by combining a stretched PTFE membrane with supporting materials that would add strenght. One of the resulting products was a waterproof laminate tentatively called expanded polytetrafluoroethylene (ePTFE). This material would eventually be trademarked Gore-Tex.

A patent application for expanded PTFE was filed on 21 May, 1970. Eventually, several separate patents were issued, including one for the stretched PTFE and one for the production process.

Robert W. Gore was inducted into the U.S. National Inventors Hall of Fame in 2006.

Several years Bob Gore´s stretching of PTFE, John W. Cropper developed a form of stretched PTFE in New Zealand, and even constructed a machine to produce it. Instead of publishing and/or filing for a patent, Cropper decided to keep the process a trade secret.