The Gatling gun is a rapid-firing multi-barrel firearm invented in 1861 and named after its inventor: Dr. Richard Jordan Gatling. It is considered a forerunner of the modern electric motor-driven cannon.

In 1870, Dr. Gatling sold his Gatling gun patents to Colt, but remained president of the Gatling Gun Company until it was fully absorbed by Colt in 1897. In 1893, he patented a Gatling gun that had an electric motor instead of the hand-crank and could fire 3,000 rounds per minute. 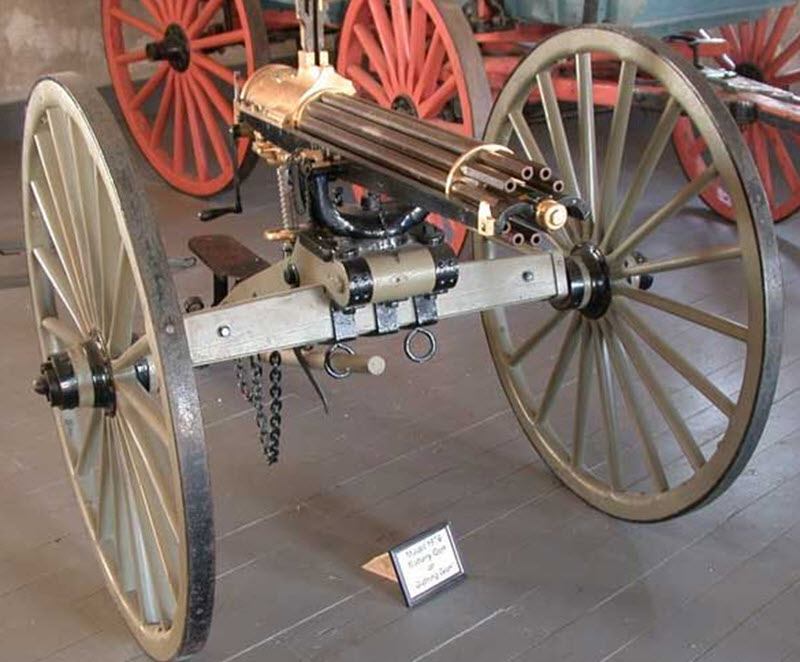 The Gatlin gun had a cyclic multi-barrel design.

As the handwheel was cranked, the barrels would rotate. Each barrel sequentially loaded a single cartridge from a top-mounted magazine, fired off the shot when it reached a set position (typically 4 o´clock), and ejected the spent casing out of the left-hand side at the bottom. Once the barrel was empty, it was given sufficient time to cool before the rotation brought it back to the top position where it was gravity-fed another round.

After the outbreak of the American Civil War in April of 1861, the inventor Dr. Richard J. Gatling in Indianapolis devoted himself to the creation of a new firearm, and the Gatling gun was the result. He patented it in November 1861 and founded the Gatling Gun Company the following year.

He wrote that he created it to reduce the size of armies and thereby reduce the number of deaths by combat and disease, and also to show how futile war is. He had noticed that a majority of the soldiers dying the in Civil War died from disease, not from gunshots.

“It occurred to me that if I could invent a machine gun which could by its rapidity of fire, enable one man to do as much battle duty as a hundred, that it would, to a large extent supersede the necessity of large armies, and consequently, exposure to battle and disease would be greatly diminished.” – Dr. Gatling in 1877

When designing the Gatling gun, Dr. Gatling was inspired by how his seed planter worked.

Short facts about the Gatling gun

When was it invented?

Where was it invented?

In the United States

Who invented and designed it?

What type of gun is it?

It is a rapid-fire gun and hand cranked machine gun.

What was the rate if fire?

In 1893, Gatling patented a new type of Gatlin gun that had an electric motor instead of the hand-crank, and this version of the Gatling gun could fire 3,000 rounds per minute.

When was it produced?

Wars in which the Gatling gun was used

The Gatling gun was not only used in wars. One example of non-war used is from 1877, when the Pennsylvania militia used it in Pittsburgh during the Great Railroad Strike.

Manufacturers of the Gatling gun