The Franklin stove was invented by Benjamin Franklin in 1742, but did not become a commercial success until it had been improved by David Rittenhouse.

The Franklin stove was a metal-lined fireplace which had a hollow baffle near the rear to transfer more heat from the fire to the air of the room. With his design, Franklin wanted to create a stove that would heat the room better and produce less smoke in the room than a conventional open fireplace. The Franklin stove design required an upside-down siphon to draw the hot fumes around the baffle, and this inverted siphon caused some problems that were later remedied by Rittenhouse.

A prolific inventor, Benjamin Franklin never patent his creations, as he was more focused on making them available to the people. In his own words, “as we enjoy great advantages from the inventions of others, we should be glad of an opportunity to serve others by any invention of ours, and this we should do freely and generously”. Since his inventions were not patented, many others – including Rittenhouse – was able to use Franklin´s designs and improve and vary them. 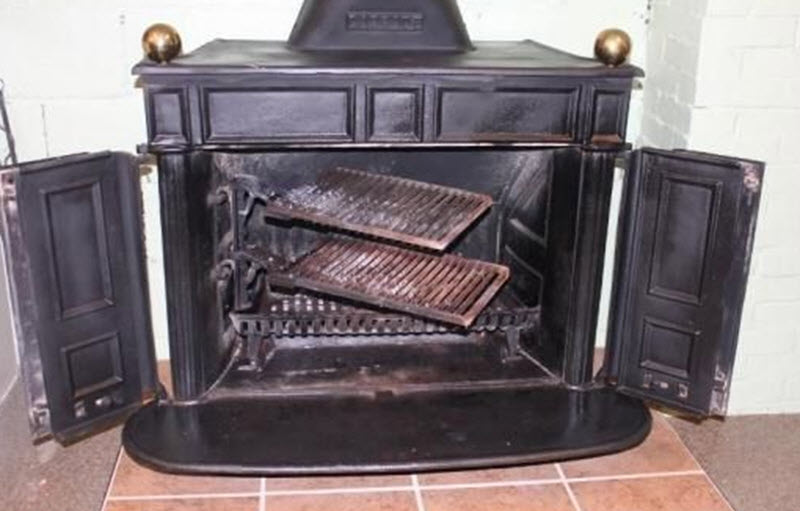 Prior to inventing the Franklin stove, Franklin studied various fireplace designs detailed by the Frenchman Nicolas Gauger (c. 1680-1730). Nicolas Gauger published his book La Mécanique du Feu (The Mechanics of Fire) in 1713. Among other things, it dealt with the use of baffles in fireplaces. Gauger´s book was translated into English by Jean Théophile Desaguliers and published as “Fires Improv’d: Being a New Method of Building Chimneys, So as to Prevent their Smoaking” in 1715.

When Franklin designed his first prototype, he also incorporated new scientific concepts regarding heat which had been revealed by the Dutch physician Herman Boerhaavel (1668-1738).

The Franklin stove was box-shaped and roughly 30 inches tall. The stove was positioned so that the back of the box was a few inches away from the flue (chimney).

The two distinguishing features of the Franklin stove:

The Franklin stove baffle was a wide but thin cast-iron box positioned inside and near the rear of the stove. It was open to the room´s air at its bottom and through two holes on its sides, close to its top.

Air would enter through the bottom of the box, and be heated twofold: by the fire and by the fumes flowing over the front and back of the box.

The heated air then rose inside the box and exited through the side holes, close to the top of the box.

The upside-down siphon was problematic. The smoke had to go through a cold flue, which was set in the floor, before it could reach the chimney. Therefore, the smoke cooled, and this resulted in the stove having a poor draft.

If a fire burned constantly in the stove, the upside-down siphon construction would work well, as a constantly burning fire kept the temperature in the flue high enough to maintain a good draft. If stove was not in constant use, the design did not work well.

Eventually, the inventor, clockmaker, mathematician and astronomer David Rittenhouse improved the Franklin stove and solved many of its problems. Rittehnhouse´s stove became popular and sold well, but it was called a Franklin stove since Benjamin Franklin was more illustrious.

Did Benjamin Franklin invent the baffle?

No, the use of baffles was already a well-known concept when Franklin constructed his stove in 1742.

No, there had been experiments with upside-down fireplace siphons before 1742. One early example is a 1618 fireplace design by Franz Kessler in Frankfurt-Am-Main, Germany, published in his Holzsparkunst (The Art of Saving Wood). A fireplace designed in 1678 by Prince Rupert of the Rhine, Duke of Cumberland, also featured an inverted siphon. In Prince Rupert´s version, a hanging iron door was positioned between the fire grate and the chimney, and the fumes had to descend below the edge of the door before they could rise through the chimney. These are just two of many examples of fireplaces designed with an upside-down siphon.