The Shaker broom vise was invented in a time when the standard broom was round. The shaker broom vise resulted in a broom that was flat instead of round, and these flat brooms proved to be more suitable for cleaning purposes. The flat-broom design also revolutionized the production of brooms, and in New England, the production of shaker brooms became an important industry. In 1850, over 1 million brooms were produced in Massachusetts alone, and a substantial amount of them were exported far and wide, and would show up in places as distant as South America.

A few of the old Shaker flat brooms from the 1800s have survived into our time, including a few made under the auspices of a Mount Lebanon Shaker Trustee named Robert Valentine (1822–1910). 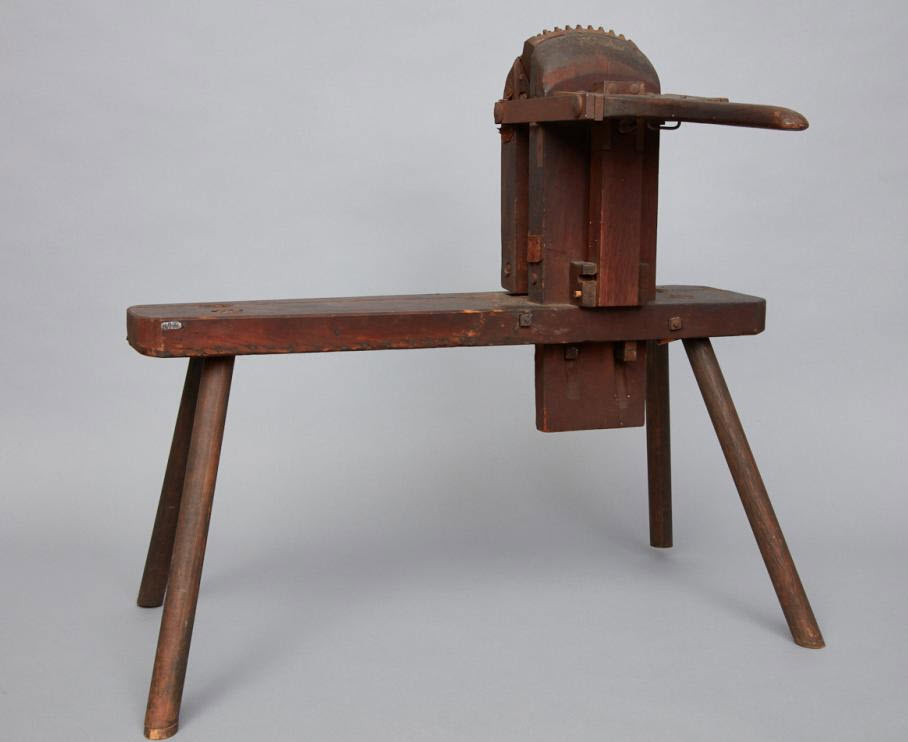 Why is it called Shaker broom vise?

It is not because the broom shakes or is supposed to be shaken. The Shaker broom vise is named based on its association with the Shaker community. This was a Christian group founded in England in the 1740s and organized in the United States in the 1780s. Formally named “The United Society of Believers in Christ’s Second Appearing”, they became known as Shakers or Shaking Quakers because of their ecstatic behavior during worship services.

The Shakers of Watervliet are credited with being the first European community to grow “broom corn” (Sorghum vulgare) for broom production in New England. (This settlement was established in 1776, in what is now Colinie, New York State.) They started making sorghum brooms in New England from broom corn grown on an island in the Mohawk River.

The inventor Theodore Bates (1762-1846) is credited with the innovation of the “flat broom” in 1789. He was a member of the Watervliet Shaker community.

Bates used a wooden vise to press the round bristles flat. This mechanism made it possible to sew heavy twine through the flattened bristles, to permanently fixe the broom bristles in that flat position. (Round brushes were typically just lashed to a round handle.)

Bates broom turned out to be more efficient for cleaning than the previous round brooms, and havinga broom fixed with twine instead of simply lashed made it more durable. Soon, people who were not members of the Shaker community wanted these flat brooms too, and began buying them from the Shakers who manufactured them.

Eventually, a majority of the Shaker villages were making flat brooms and flat brushes. One notable example is the New Lebanon community in Columbia County, New York State. At this time, the Shakers already had a well-developed woodworking tradition, and the new flat brooms worked well with their lathe-turned wooden handles.

During this era, flat brooms were considered to be of higher status than old-fashioned round brooms, and were often hung on the wall when not in use and covered with cloth-hoods for protection.